It’s good to see @srcav back in the twitter and blogging fold - he’s been missed!

As part of his comeback, he shared this lovely geometry puzzle:

Assuming the situation is symmetrical (which it needs to be to get a sensible solution), there are - as usual - several ways to solve it. Like Cav, I went the messy way first; however, I wanted to share a related solution using the power of complex numbers - and (much later) one that comes directly from a little-used circle theorem.

Suppose the set-up is an Argand diagram

A circle theorem? In the wild? Someone grab it! 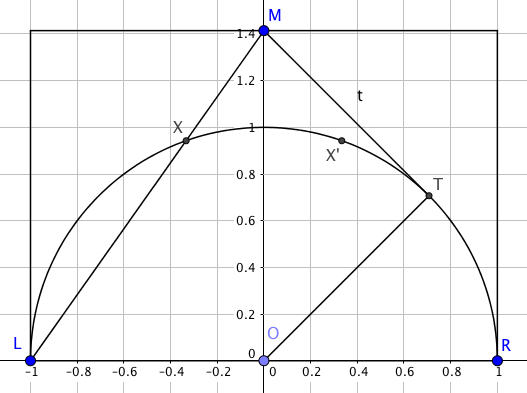 You might be forgiven for thinking, having heard me rant every so often, that I dislike circle theorems. That’s not true. In fact, I adore circle theorems. I just don’t think they have any place in a compulsory maths exam.

I even have a favourite! The intersecting chord theorem states that, if two chords AB and CD intersect at point P, then the products of the part-chords are equal: $AP \cdot PB = CP \cdot PD$.

Interesting thing: the same result holds, even if the crossing-point is outside the circle (and the chords are extended to become secants). It also holds even if one of the chords is, in fact, a tangent, with its endpoints in the same place.

That’s the situation pictured here: the square of the tangent $TM$ is equal to the product $LM \cdot XM$.

That means $XM$ is a third of the length of $LM$, and since triangle $LMR$ is similar to $XMX’$, the smaller triangle has a ninth of the area of the large one.

I think that’s a really elegant approach - but I’d be interested to see anything else that’s as neat!

* Many thanks to @srcav and @profsmudge for discussions on this problem.

Equations of a straight line: Secrets of the Mathematical Ninja