In a class recently, I came across a circle theorem problem I’m certain I’ve seen before, but that I didn’t know off the top of my head how to solve. Here it is; have a go at it if you’d like to. 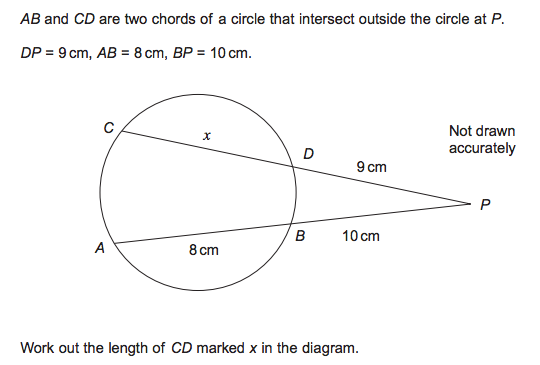   The examiners’ expectation was clearly that the student would know that PD:PA = PB:PC - and neither she nor I did. If you’ve learned the circle theorems by rote, congratulations: if you didn’t have this one on your list, you’re stuck. However, if you’ve played around with them, you’re in luck.

You might say: I can draw a butterfly by adding the line segments CB and DA. Then I know angles DAP and BCP are the same size - which means PBC and PDA are similar triangles. (Do you see why?)

I know a few circle theorems. They’re my canonical example of things to know for the exam that will be no use to you ever, although I once advised a friend to use one to find the centre of a circle he’d drawn, and I’m told they can be used by rugby place-kickers to find the best angle to kick at goal.

I don’t know every circle theorem, by a long shot. (Every so often, someone shows me something circle-related and I go “wow!” before forgetting it instantly.) But what I can do is work problems out from first principles when I don’t know.

And that, in a nutshell, is what I think is the major difference between the “chant your times tables” school of thought and my idea of maths: memorising large lists of facts can get you a long way; a short list you can manipulate to work things out gets you much further.

Ask Uncle Colin: an integral that's giving me a headache

Maths: You've got it all wrong