On a recent MathsJam Shout, an Old Chestnut appeared (in this form, due to @jamestanton): 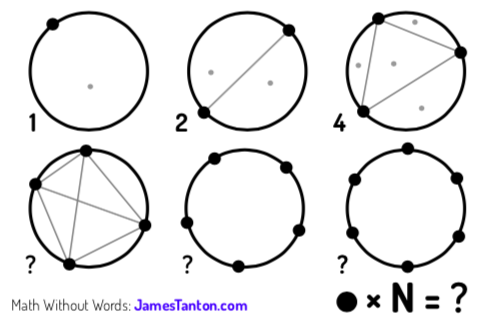 If you’ve not seen it, stop reading here and have a play with it - it’s a classic puzzle for a reason.

Below the line are spoilers.

The first thing you’d probably try is to draw out the lines and count up the regions.

The first circle has 1 region.

The second has 2 regions.

The third has 4. (I’m spreading these out to try to avoid accidental spoilers, by the way.)

The fourth has 8. A pattern seems to be forming.

What is going on?

As you draw more and more points, it gets harder to a: make sure you’re not making your lines coincide and b: count the regions accurately. At MathsJam, we made it to the seventh circle (57 regions) before realising that was about as far as we could go.

So we needed a more methodical approach. The nugget of the solution - for me, at least - was to think about how each line you add to a diagram affects the number of regions - and that’s related to the number of lines it crosses. In fact, adding a line that crosses $n$ other lines adds $n+1$ regions to the circle - which you might like to prove.

So, in adding a fifth point to the fourth circle, we’ll need to add four new lines.

Going from five to six is a bit trickier ((because counting is hard)).

Let’s consider the five existing points, going anticlockwise from our new point (which I’ll imagine is at the bottom of the circle). Each new line will split the polygon into two parts, which I’ll call ‘left’ and ‘right’.

The first line, to the neighbour, crosses no lines, and adds one region.

The second line, to point 2, splits the circle so there is one point to the left and three to the right, all of which are connected - so this line adds $1 \times 3 + 1$ regions.

But we can generalise!

And we can write that explicitly!

Expanding that and distributing the sum:

Wrong, but Useful: Episode 76b

How the Mathematical Ninja multiplies by 67

How big a lead can a football team have?