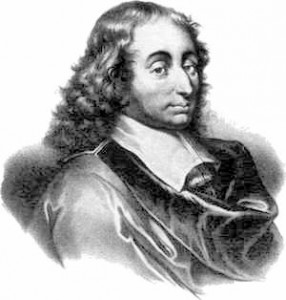 My current hero of mathematics - like Ramanujan - died before he was 40. Like Ramanujan, he’d already revolutionised maths by that point.

Blaise Pascal (born in Clermont-Ferrand in central France in 1623) can reasonably claim to have invented probability theory, and the first calculator; he was also the first to demonstrate that a vacuum can exist and that pressure exerts a force evenly in all directions (the SI measure of pressure is named the pascal in his honour). He also studied a triangle you might have heard of, and analysed a wager that also bears his name.

I’ve nominated Pascal as a mathematical ninja not just for his swift work, but because of the sheer gall of what he did: one of the first Proper Scientists, he was ready to kick just about any sacred cow if he had the evidence for it. Aristotle says there’s no such thing as a vacuum? Let’s check. Oh, lookit: vacuum ahoy. You need a certain level of arrogance to gainsay Aristotle, and even more to have your gainsaying grudgingly accepted.

Also, Pascal’s triangle. (As Stigler’s Law of Eponymy dictates, it wasn’t discovered by Pascal; it had been in use since at least the 10th century. Pascal did come up with a load of analysis on it, though, and used it to figure out how to divide up the winnings of a card or dice game when they didn’t have time to finish it. Sterling work, that.

A Puzzle Full of Nines