In the American date format, today is 3.14 - a pretty good approximation to $\pi$, which (as any fule kno) is the ratio between a circle’s diameter and circumference. It’s also the focus of most of the jokes about maths, because - get this - it sounds just like pie! So, you can get T-shirts about apple $\pi$, shepherd’s $\pi$, $\pi$rates and so on - the only limit is the size of your dictionary and/or recipe book.

So, in celebration, I thought I’d come up with a few interesting things about $\pi$. That may not be on a t-shirt.

The usual approximations for $\pi$ are 3.14 or - if you’re feeling really fancy - 3.142. With decimals (and even fractions), you can only approximate $\pi$, because it’s an irrational number - but you can get pretty close. Here are some of the best approximations, with their percentage error:

As you can see, $\frac{355}{113}$ is as close as you’ll ever need. At that scale, you could estimate the circumference of the earth to within about 3 metres. It’s not bad.

There are all manner of mnemonics - silly phrases to help you to remember the decimal expansion of $\pi$. My favourite:

“May I have a large container of coffee? Thank you. Beans! Espresso! Brazilian! Roasted Bahitalia for my pot. Mornings need coffee, or sleepy time all day.”

One of the most famous equations in maths is Euler’s identity - just like you can’t walk through a town in America without seeing something named after George Washington, there’s barely any maths you can do without finding something Euler had a hand in. Euler’s identity is $e^{\pi i} + 1 = 0$, which involves the imaginary square root of -1 ($i$). It’s one of the places where, if you don’t know anything about complex numbers, you do a double-take and say “what’s that $\pi$ doing there? This is nothing to do with circles!” … only for you to realise later that it’s everything to do with circles. And all of your trig identities, too. 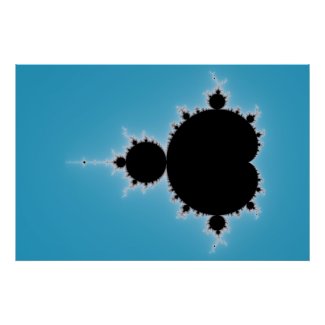 It also appears - and this is my favourite - in the Mandelbrot set. This is another area of complex analysis that you probably don’t care too much about, except in a “look at the pretty pictures” way. It’s generated by applying an algorithm to all of the points in an area and plotting the ones that converge to a value. It turns out that in certain areas (such as the very thin ‘neck’ stretching out to the left), the number of iterations you need is almost exactly a multiple of $\pi$. See here for more details!

Lastly, you find $\pi$ in rivers. Einstein (all hail!) was the first to think about the difference between the actual length of a river and the distance as the crow flies, from the source to the mouth. The ratio between the two? It’s $\pi$.

I think that’s enough $\pi$ for now. I’m going to go and celebrate - as is traditional in the maths world - by having some pie. (Here in the UK, we get to celebrate both the American $\pi$ day - 3.14 - and the British $\pi$ day, which is $\frac{22}{7}$. As we established earlier, the British version is a better approximation.)

How many people did they ask?

Why the Mathematical Ninja hopes for a hard exam