“Is Hamburg that much further north than London?”

I furrowed my brow. Hamburg, to the best of my knowledge, is not that much further north than London. But here it was, written in stone (on the side of Durlston Castle in Swanage.) 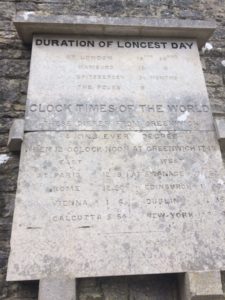 Things were about to get geometric.

My model of Earth is not as large as the Large Globe, a short walk from where we were, but that makes it much more portable. I can carry it in my head. 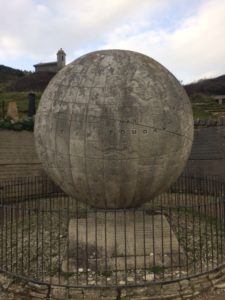 It consists of a sphere of unit radius (because “Earth radius” is a perfectly good unit to measure the Earth in), with a plane cutting it at an angle of (up to) 23.5º ((Yes, degrees are the standard unit for measuring the planet. I don’t like it, but I have to go along with it.)) to the vertical, passing through the centre of the sphere.

Each line of latitude is a horizontal circle, with radius $\cos(\lambda)$, where $\lambda$ is the latitude.

Where does the day/night plane cut the circle? A diagram will help here. 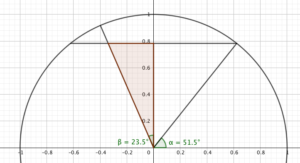 So, how much of the line of latitude is in shadow at solstice? Another diagram will help. 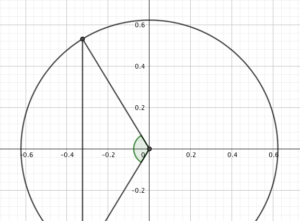 Now we’re looking down on London, and not just because Dorset is so much nicer. The line is where the day/night plane intersects the circle, so if we know the green angle, we can work out the number of hours of darkness we have.

We’re not particularly interested in the angle itself, but rather the fraction of a circle it represents: here, that’s a bit less than a third; dividing by 360º, multiplying by 24 and converting to hours gives 7 hours and 49 minutes – meaning 16 hours and 11 minutes of daylight, which isn’t too far removed from the answer written in stone.

We now have a model: at summer solstice, the number of hours of darkness is:

I’d generally rewrite that, as I have a mild allergy to arccosines:

This also means we can easily work from either side to find $\lambda$ given $H$ or vice-versa.

Now, the writing on the wall says that Hamburg’s longest day is 19 hours - so just five hours of darkness. Does that check out?

That’s not my Hamburg! Its latitude is too northerly!

According to worldatlas.com, Hamburg’s latitude is more like 53.6º - roughly level with Manchester.

According to The US Navy, the true answer is 17 hours - again, off by about 10 minutes ((I believe this is due to how the sunlight refracts through the atmosphere, but that’s physics.)).

I don’t know how long the stone has been up at Durlston Castle, but if I were them, I’d be taking it back for a refund.

* After a request from Quantum Mechanic, I’ve transcribed the writing:

Clock Times of the World

These differ from Greenwich 4 mins every degree When 12 o’clock noon at Greenwich, it is

Ask Uncle Colin: Where Should I Send Charitable Contributions?

A student asks: how do I manage nerves in my exam?