I have no particular view on the sovereignty of the Falkland Islands. Or rather, I get so muddled up between my distaste for colonialism and the right of self-determination that I don’t know what to think.

In any case, I was interested by the recent referendum results in which the results were reported as 99.8% of the turnout voting ‘yes’ and three people voting ‘no’, results that wouldn’t have looked out of place under Saddam Hussein. Not that I’m comparing the queen to Saddam Hussein. Really, that wouldn’t be at all nice ((I’ll leave determining who gets the worst of the comparison as an exercise for the interested reader)).

The original percentage question isn’t all that hard, although it needs a bit of thought: the three people represent 0.2% of the Falklands’ electorate ((at least, of those that bothered to vote)) - and a little work with the Table of Joy gives you: 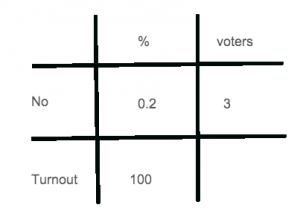 We can do the same Table of Joy sum, simply changing the number after the $\div$:

Alternatively, I could have looked up the results in a newspaper: the turnout was 1,516.

The pull of the planets

Why we lose mathematicians (a hypothesis)