Like everyone else on Twitter, I’m a sucker for a nice-looking question, and @cshearer41 is a reliable source of such things.

I particularly liked this one:

There are two equilateral triangles inside this semicircle. What’s the area of the larger one? pic.twitter.com/Nvy01z2j5f

Straight in with the instinct

“OBVIOUSLY 12.” It jumped out at me that the side of the larger triangle was double the smaller one. It’s a portion of a star-of-David.

But why is it? That turned out to cause me more problems than I expected – and in a @DavidKButlerUoA-inspired “show what you tried”, I’ll talk you through the methods I considered.

Is it really double?

Who says it’s a perpendicular bisector? (It is, but I haven’t proved it).

The best proof I could come up for it is this: reflect the triangles across the diameter, then the green angle at the centre is double the green angle on the circumference (which we know to be $\piby6$). We’d need to confirm that the lines involved are in fact straight (they are). The radius to the right-hand vertex of the small triangle is therefore at right angles to its leftmost side (yadda yadda isosceles yadda yadda bisector). 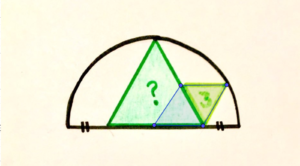 Something that eventually popped out at me was this blue shape here. The bottom-right corner has an angle of $\frac{2}{3}\pi$, and the top-right one of $\frac{1}{3}\pi$. The top and bottom sides are therefore parallel, making the shape a parallelogram.

So, the big triangle is the same size as four little ones.

I can’t help but feel I’m missing a trick here (I reject Pythagoras as overly ugly). Do you have a straightforward argument for why the side length has to be half?

A Challenge to the Mathematical Ninja

Three simple tricks I wish my GCSE students would use